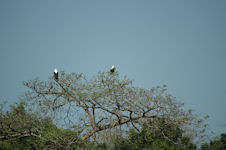 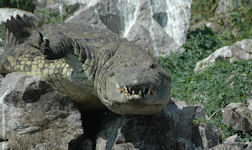 --A pair of fish eagles guards the gentle bay, their
--distinctive black, white and chestnut feather
--pattern glearning boldly in the morning sun.
--Suddenly, the birds toss back their heads in a
--Piercing, evocative duet.

--On the rocky bank below, a well-fed and five
--meter long monster of a crocodile snaps to life,
--startled from its nap. It stampedes through the
--crunchy undergrowth, crashing into the water in
--front of the boat, invisible except for a pair og
--sentry-post eyes that peek menacingly above
--the surface to monitor our movements.

Rubondo Island is tucked in the southwest corner of
Lake Victoria, the world’s second-largest lake, an inland
sea sprawling between Tanzania, Uganda and Kenya.

The national park has a number of indigenous mammal species - hippo, vervet monkey, genet and mongoose - which share their protected habitat with introduced species such as chimpanzee, black-and-white colobus, elephant and giraffe, all of which benefit from Rubondo’s inaccessibility. Rubondo also protects precious fish breeding grounds. 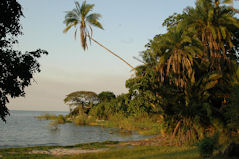